In March this year I was invited to speak at a conference in Paris. It wasn’t an unqualified success, there being no translator and my French being fine for chatting in a bar but not really up to presenting at a conference. However the nice people at the Ecole Nationale Supérieure d’Architecture de Paris-Belleville agreed to pay for my hotel for a second night giving me a whole day to myself with the city to explore with the help of a vélib. The notes below are transcribed from my note book and were written in a bar just outside Gare De l’Est. The maps are from the sequence that we are producing for the Climax City Project.

A March saturday in Paris, unseasonably warm, taking full advantage of the Pari-bike scheme to undertake a bit of psycho-urbanism. Starting from Montparnasse and travelling via the Eiffel Tower to the Bois de Bologne then back across south of Sacré-Coeur to the Grand Boulevards and St. Denis. Then weaving through the tourist crowds across Île de la Cité to the Rive Gauche and back up the hill to Montparnasse. A route that I will measure on Google Earth when I get back to an affordable Internet connection (15 miles). The first thing you notice when cycling in Paris is that it is really quite hilly, there is a third dimension that doesn’t come out in the urban design analysis. The Arc de Triomphe sits on top of a hill that is really quite steep when you approach it from the river – must try and get a contour plan to add to our mapping.

The other thing that you notice is how absolutely beautiful it is! It is no false claim to to say that it is the most beautiful city in the world, but less easy to work out quite why this is. As you cycle around you constantly come upon set pieces that have been planned – the vista along a boulevard, the six pointed Étoile, the formal park or promenade. But the city’s beauty lies in the interaction between these set pieces and the organic chaos of the older city which reasserts itself around every corner. The European norm is for a dense organic old town and a modern (relatively speaking) brash extension of avenues and Boulevards. Barcelona and Milan are particularly stark examples, but this arrangement is the norm in many continental cities where the old town was extended to create a new planned district. Freed from the restrictions of existing buildings and ownerships these ‘new towns’ are grandiose and impressive but they don’t have the richness of Paris.

In Paris generation after generation of urban designers have tried to impose order on the unruly city. They have sliced it up with new streets straight as a die, radiating from grand six pointed junctions (les Étoile), squares and parks. Some schemes have failed like the great masterplan for Temple that Eric Hazan describes in his book The Invention of Paris: A History in Footsteps although echoes of these plans can still be found if you know where to look, as Hazan does, in the angle of a street or the position of a small square. However many of the plans were realised by fiat of King or Emperor and still have the power to take your breath away when a vista suddenly opens up. The city is a collection of these set pieces, rather than a coherent plan, and within a few footsteps of the grandest formal urban composition can be found a tight medieval street that predates it all.

We have this idea that it was Haussmann who masterplanned Paris, but in fact he was just one of a long line of a planners who have sought to put their stamp on the city. They take their place alongside those who built Paris’s five sets of walls, the engineers who cut her canals and the paysagistes who laid out her parks. London is a similar mix of the planned and the organic but in the chaotic free market (if you are French) freedom and democracy (if you are American) of London the organic generally wins. The unstoppable force of the market and the inalienable rights of land owners have thwarted attempts at grand planning line Wren’s masterplan for London after the Great Fire. Further more, when grand planning was tried, be it in Bloomsbury or Knightsbridge, which were laid out on estates at the edge of the city, they were designed in an anti-grandiose fashion, grandiosity being very un-English.

So London is an organic informal city for all its planning, while Barcelona and New York are planned cities for all their riotous growth. Paris by contrast stands at a point of balance between the organic and the planned. Its effortless urban set pieces took great effort to impose on the unruly city. They required the power of a centralised state – absolute monarchy or emperor – set against a teaming riotous urban population. Not necessarily a model to be emulated but the formula for a beautiful city. 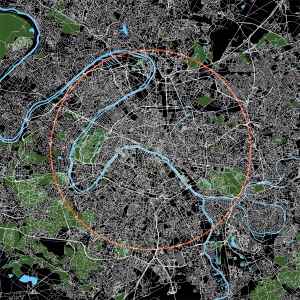 Paris at three scales: A Trellis plan (left) with a 10km circle, the 2km Figure Ground Plan (centre) and an 800m Tissue Plan (right).
Below – Paris as it would have been if Le Corbusier had seen his plans for the city realised