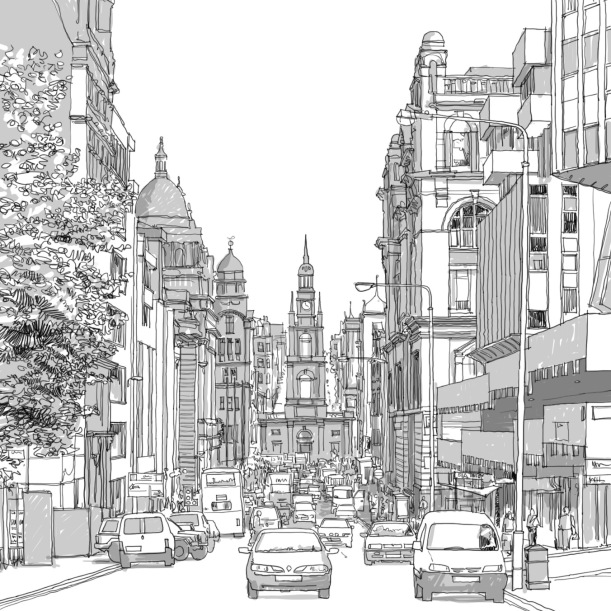 In 2010 Glasgow was one of the three cities shortlisted by the Academy of Urbanism for its Great City Award and indeed was eventually voted as the winner. This is the report of the assessment visit to the city.

A number of the people that we spoke to when the Academy visited Glasgow started their presentations with an infamous front cover from the Observer Magazine in the 1980s. Over a picture of urban devastation ran the headline ‘Home Rotten Home, what its like to live in the worst corner of Britian’, by which, of course, they meant Glasgow. This was the city’s nadir and in hindsight also its turning point. It is difficult to believe that this is the same city described last year by Conde Nast as a ‘a fantastic world class city’ by the OECD as the ‘the New Berlin’ or even more improbably by Vogue as ‘the chicest city in the world’.

However once you spend some time in Glasgow, walking around the city centre –  it’s stylish shops, new financial district and creative Merchant Quarter – and travel around the environs of Kelvingrove, the redeveloped Clyde Waterfront and the new urban quarter of Crown Street the hyperbole is not so far fetched. In the words of Time Magazine; ‘brimming with style and culture, Scotland’s second city is a revelation’.

Glasgow is a city transformed and it is almost impossible to imagine it, as it was when it had an unemployment rate of 60% and was described as a ‘Hellish mix of drink poverty and violence’. Well almost impossible. On visiting the city’s East End and hearing about districts like Carlton where male life expectancy is just 53.9 years (compared to 67.4 years in Iraq as the Sun Newspaper helpfully pointed out) you realise that the Glasgow of old has not been entirely banished despite huge efforts and investment by the council and other agencies.

Glasgow’s transformation may not be complete but the extent of its renaissance is pretty impressive. No other city has recovered so well having fallen so far, and it holds lessons for the reinvention of industrial cities across the western world. However as we heard, Glasgow’s origins are not, in fact, as an industrial city. It started as a religious centre founded on the rather dubious myth and relics of St. Mungo. The cathedral is the oldest in Scotland and the University is the fourth oldest in the UK (after Oxford, Cambridge and St. Andrews).

It later developed as a trading centre on the Clyde, built on the back of slaves in the cotton and tobacco trades.  Such was its wealth and growth rate in the early 19th century that a new town was build to the west of the cramped medieval city centre. This extension was gridded like a North American city, heedless of the site’s topography, and one of the presentations described it as Chicago on the Clyde, the most easterly American city. There was in fact an lively interchange between Glasgow and the US, with Glasgow architects helping to shape the architectural character of cities like Chicago and then reimporting the American influence to Scotland. So successful was the new town that the city centre shifted westwards. Today Trongate once the western entrance to the old city now marks the eastern boundary of the city centre.

By the beginning of the 20th century Glasgow’s population had grown to more than a million and the city was designing and building half of all the iron-built, sea-going ships on the world’s oceans. It was one of the preeminent industrial cities of Empire – one of the ‘shock’ cities of the age doubling and trebling in size as it sucked in people from the highlands and Ireland. At its peak it was a city of great contrasts – able to stage the 1903 International Exhibition and commission world-class architecture like Gilbert Scott’s University Building and Macintosh’s School of Art, yet with some of the most notorious slums in Europe.

It was from these heady heights that Glasgow fell. In the latter half of the 20th century its industrial base collapsed, its population halved and it became the ‘Home rotten home’ described by the Observer. Its route back from the brink has been an object lesson in city regeneration. This stated in the 1980s with the establishment of the Tourist Board and the opening of the Burrell Collection along with the 1988 Garden Festival. However the big breakthrough was its designation in 1990 as European City of Culture which Glasgow used very skilfully to relaunch itself.

The two decades since then has seen the physical transformation of much of the city. The city centre has been regenerated and we were told that it is now the largest retail centre outside London. The Merchant City has been revived as a cultural quarter, the Universities are expanding and being restructured to create a new learning quarter, while the city centre has expanded towards the river with the new International Financial Services District. To the west the former ship yards on the Clyde house the Scottish Exhibition and Conference Centre (the Armadillo) together with the new Digital Media Village and the HQ buildings for the BBC and Scottish Media Group. To the East the Clyde Gateway project is being managed by an Urban Regeneration Company that is using the 2014 Commonweath Games to kickstart a £2 Billion  regeneration programme starting with a Games Village of 700 units and four new venues. Across the city 21,000 social housing units are being redeveloped and neighbourhoods like Crown Street (the former Gorbals) are being used as model to regenerate neighbourhoods around the city.

The results are impressive. In the decade to 2007 the city’s economy grew by 20% creating 63,000 jobs and attracting 45,000 new residents. The city’s confidence is reflected in its carefully managed image – ‘Scotland with Style’ and its momentum has carried it through the early years of the recession. In 2009 there was a £3.95 Billion investment programme underway.  Some of the plans, especially in the East End seem ambitious in the current economic climate but even here the city is fortunate to have the Commonwealth Games as a focus for investment to see it through the worst days of public sector cutbacks.

Today Glasgow really does have a certain style and huge self-confidence. In the UK we are not always very good at recognising that we have our own great cities that can match Milan, Barcelona, Copenhagen and Chicago. Glasgow may not quite be at the level of these cities, but walking around on a warm evening at the end of Summer on the Academy visit it really did feel like somewhere special. The red sandstone buildings, the granite paving and warm glow of the shops and bars felt a little like Stockholm or Copenhagen. Considering the state of Glasgow less than 30 years ago the it is remarkable we can even make these comparison.