URBED was founded in Covent Garden at about the same time as the Labour Minister Peter Shaw was drawing up the first inner city legislation. It is difficult to imagine today that Covent Garden could ever be in need of regeneration but as I have written elsewhere in this blog Covent Garden in the year after the market moved out was in a desperate state and there were only a few people who could imagine it ever recovering.

At the event we heard from speakers like Alan Stones, and Tim Wacher who worked in Covent Garden in the mid 70s. They described how Covent Garden was once a place without shops or places to eat, where developers could not borrow to refurbish buildings and where the only future that policy makers could imagine was redevelopment. All this said looking out over the rooftops of modern-day Covent Garden that is one of the busiest and most expensive districts in London. After the relocation of the markets in the 1970s Covent Garden was left as a run-down, largely abandoned district on the periphery of Westminster the City and the West End. This is a geography that makes little sense in modern London. However during the recessions of the 1970s when the country was in the middle of the three day week and rolling blackouts, London was in steep decline. We were told that Covent Garden’s only saving grace was that it had its own tube station on the fashionable Piccadilly Line.

As was the way at the time, when the market moved out of Covent Garden the planners moved in. Plans were drawn up for the redevelopment of the area by the Greater London Council that would have retained the market structures, but surround them with a complex of high-rise buildings and split level walkways in the manner of the Barbican which was still much admired at the time. The plans prompted a very well-organised local campaign to save the area.

As Nicholas Falk explained at the event, URBED was founded in Covent Garden at about the time that this campaign succeeded. He and Christopher Cadell – URBED’s cofounder – had returned from the US some years earlier to explore the application of the economic and management approaches that they had learnt at the Ford Motor Company and McKinsey’s to the messy business of reviving cities. Nick wrote a pamphlet on the subject for the Fabian Society as a result of which he was invited to lunch by David (now Lord) Sainsbury. They agreed that it would be a good idea to set up a company to apply business ideas to urban problems, which was how both URBED and the new field of urban regeneration were born. David Sainsbury provided a small amount of start-up funding from his charitable trust the Gatsby Foundation and URBED rented rooms from Christina Smith (Conran’s secretary) on Irlam Street. Within a short time we had moved to Henrietta Street employed some staff and taken rooms on both sides of a corridor!

One of URBED’s early projects was to organise a Space Exchange in which small companies looking for premises were linked with the owners of vacant buildings. A lease agreement was drawn up insulating both parties and enabling creative businesses to move into the area. This is a precursor of the Pop-up trend of recent years, born out of similar circumstances in the teeth of a recession. Nick quoted from an early URBED report on 5 Dryden Street which had been developed as one of the earliest managed workspace schemes. This was packed with small companies many renting just a single desk, incubating a whole generation of creatives who would go on to occupy spaces in the surrounding streets. These companies in turn generated a demand for cafes and bars which started to fill the ground floors of the area. Meanwhile the GLC completed the refurbishment of the Market hall opening up the huge basements by cutting away the floor and filling them with speciality shops, eateries and more bars. 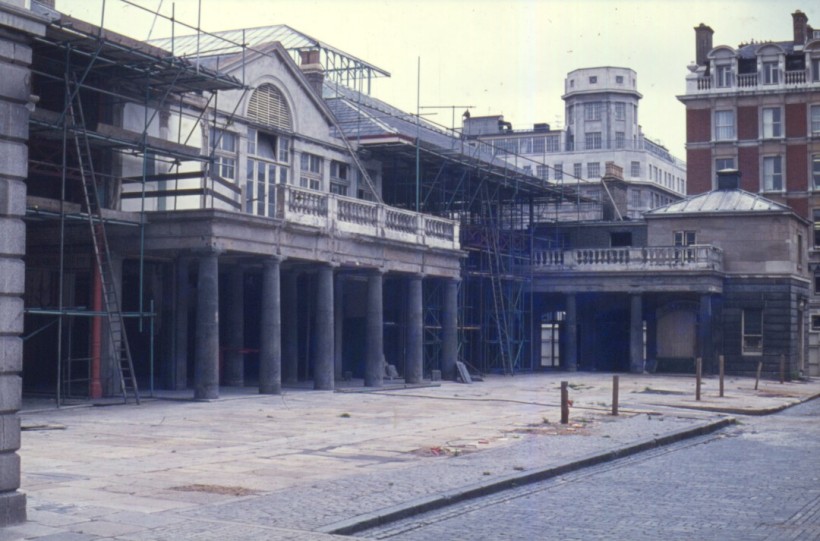 Covent Garden was one of the first areas to experience this type of recovery, to see its heritage saved through creativity. This was a theme picked up in Charles Landry’s talk at the event. Looking around the room he said, ‘I never understood why you lot were so fascinated by old machinery’. However this fascination when translated into a desire to restore old buildings, was transmuted into a campaign to regenerate neighbourhoods and eventually to resuscitate whole cities. In doing this we found that heritage and creativity are great partners. Not only are creative types just the people to save old buildings, but, as Jane Jacobs pointed out, ’ new ideas need old buildings’.

Using examples from across the world, Charles showed that time and time again creativity and innovation emerge from old buildings, whether it be the former Nokia Cable Works in Helsinki, the old Phillips Factory in Enidhoven or indeed the old market buildings of Covent Garden. Why, he asked, given that conditions in these old buildings were often so terrible, does this strange alchemy occur? There are practical issues, of course, like being cheap and not having to sign up to a long lease. However Charles also though that there was something about the space that old buildings provide, that allow room for creativity and collaboration. This is something we need to better understand because there is not an unlimited supply of old buildings, whereas creativity and innovation are a ‘flexible, renewable resource’. Cities across the world have used their stock of old buildings to kickstart a new creative, innovative economy, often employing far more people than the buildings did when they were mills and factories. We need to understand how to sustain and nurture this creativity once all the old buildings have been used-up or converted to apartments as has happened in Covent Garden.

Leanne Hartly picked up on this theme, describing cities not so much as physical artefacts as but as a rich web of social connections. Cities are the original form of social media, bringing people together, building networks and contacts. She went as far as to challenge the original assumption behind URBED’s foundation, struggling to understand how you can apply rational business ideas to chaotic complex urban systems. This is why new buildings are so poorly suited to creativity. They are created on spreadsheets and designed with very clear ideas about what each space can be used for. Old buildings by contrast are spaces designed for functions that are long gone and are thus receptacles to be filled with anything you want. They are also spaces that tend to be occupied by a multiplicity of small companies, unlike new spaces that are let to single companies. This built-in interaction allows them to generate new operating systems. This is the process of regeneration and can be seen on a huge scale in Detroit where the wide open spaces of the dead city are being filled by informal networks and business. Leanne’s practices is called ‘Mend’ and she identified the process by which cities ‘mend’ themselves, that happened in Covent Garden, as the thing that planners should be striving to create.

This mending didn’t take very long. By the 1980s Covent Garden was heaving with tourists and buskers, chi-chi restaurants and expensive shops. This regeneration tide swept away many of the creative businesses that had been there at the beginning (5 Dryden Street has long been converted to apartments). The spirit of those few short years can still be found in enclaves such as Neal’s Yard but, on the whole, things have moved on and Covent Garden is an expensive, slightly faux neighbourhood, dressed up for the tourist industry. We should probably ask whether this is what successful regeneration looks like or whether something went wrong? Charles Landry started his presentation by saying that the regeneration industry has gone from rearguard to vanguard. From an irrelevant lobby seeking to hold back the tide of ‘progress’ to the cutting edge of that progress. However vanguards and cutting edges are forever pushing on – regeneration is rarely a stable state. Having been regenerated by creatives, places like Covent Garden can easily overheat, pushing up rents and values and pushing out the early pioneers. This may be the way of the world and the creative surged on to stimulate the subsequent regeneration of Camden and Hoxton, Shoreditch and now Hackney. Whether the creative industries are fed up at being moved-on every decade or whether this is how they retain their creativity is difficult to answer. The bigger question is what happened when we realise that old buildings and run down neighbourhoods really are a finite resource?

One thought on “URBED at 40: What we learnt from Covent Garden”